If you are a drone enthusiast, then you may be looking for ways to make the activity more exciting than simply hovering your device around the park. To meet this demand and to use drones to their fullest potential, several drone racing leagues have popped up all over the world in recent years. Rotorcross was the first professional league to form, and it was based out of New Zealand and Australia.

The sport is relatively straightforward. Competitors race their devices through a course, which may be filled with obstacles, and try to be the first to cross the finish line. Operators see what is going on throughout the course with the aid of a camera strapped to the drone itself. Therefore, people see what the drone “sees.”

There are several different leagues involved with competitive drone racing. Arguably the most famous is the Drone Racing League. However, other popular organizations include:

DRL is quickly becoming the most prominent racing league, and it has broadcasted competitions over Sky Sports and ESPN. In the near future, it could very well become the NASCAR of drone racing.

Technically, almost any type of drone can be raced, but the exact equipment necessary will depend on the league you are in. For example, DRL supplies drones to competitors as well as any backup part in the event of a crash. However, for other leagues, such as DR1 Racing, competitors will need to supply their own drones and are responsible for supplying any replacement parts.

The most important feature is that the item needs to have a camera on the nose. Images captured by the camera are transmitted to a monitor or goggles possessed by the pilot. This transmission is sent through radio waves. Generally, goggles required to race can be acquired for anywhere between $50 and $500. However, the more expensive pieces tend to come with extra features that can be beneficial on the course. These features include DVR, head tracking, and a wider field of view.

About the Drone Racing League

As the most prominent league currently in existence, any serious competitor will want to try to get into the DRL. This organization was started by Nicholas Horbaczewski and Dan Kanes. Horbaczewski is the former Chief Revenue Officer of Tough Mudder while Kanes came up with the original concept for the sport. Justice Laub also helped bring the league to fruition by handling the marketing and business development components of the job. The league received a lot of initial funding through Lux Capital and RSE Ventures. Another early investor for Stephen Ross, owner of the Miami Dolphins.

The first season of the sport launched in early 2016. Bud Light and Toy State sponsored the games, and the races took place at various locations across the United States. Some of the featured venues included the Miami Dolphins Stadium, a Detroit auto plant, and an abandoned mall in Los Angeles. The races were broadcast in dozens of countries, and 75 million individuals tuned in either through TV or online.

The second season saw great expansion. The sponsors for the 2017 event were the U.S. Air Force, Amazon Prime, FORTO Coffee Shots, and Allianz. Jordan “Jet” Temkin, who won the first season, also took home first place this time around. The courses themselves saw an international expansion, and this time, courses were located in the United States, London, and Munich.

One noteworthy aspect of DRL is the fact they require all pilots to race the same drones. The reason for this is to ensure the person who wins is the person who flew best. This prevents a pilot from winning simply because he or she had a more technologically-advanced piece of equipment.

Many courses throughout the various leagues test a pilot’s ability to maneuver a drone in a number of styles. Here are some of the most common types of courses and what they are meant to test.

Most courses are outfitted with special lights and cool effects for a one-of-a-kind experience. Some of the leagues even encourage fans and competitors alike to submit locations that would make for exceptional courses. In many instances, the races are held in abandoned facilities that can be made to look like anything. The designers can get extremely creative when it comes to designing a course that is both fun and challenging.

How to Get Involved

Although the sport is still relatively new, it can be difficult to get involved on a professional level. This is especially the case for anyone who wants to be part of the Drone Racing League. The best way to get started in drone racing is to take a class and join a team in your area. You will need to acquire your own drone and goggles in order to partake in the events. By being part of a team, you will learn when events are taking place near your city. Your team may even drive out to another state to get involved and have fun.

As time goes on, you will be a part of more and more competitions. It is at this point you may catch the attention of a professional who wants to test your skills in a more experienced event. This is an excellent time to get involved in drone racing if you are not doing it already. Since it is still fairly new, there are still a number of ways for the sport to grow. You can get your foot through the door and start making connections to potentially be the next big thing in the drone racing world.

The sport is already earning praise from numerous outlets. For example, the Drone Racing League was named as one of the most innovative companies in 2017. Part of what is so incredible about what DRL has done is that it managed to get broadcasting rights from a major network. It is clear that stations, such as ESPN, are invested in turning drone racing into the next big spectator sport. DRL also won an award from Cynopsis Media for being one of the most innovative companies in the last year. It is certainly a startup to watch that will only gain more notoriety as time goes on.

The Future of the Sport

Being so new, drone racing can go almost anywhere in terms of popularity. Plenty of new sports pop up every year in an attempt to be the next big thing. However, while some will become instant successes, such as the Electronic Sports League, many others will fall apart sooner rather than later, which is what happened to the National Xball League.

There are some obstacles the sport needs to get over before it can enjoy any kind of mainstream success. For starters, the league needs to make it easier for spectators to follow along with their favorite competitors. One problem with drones is that they all tend to look the same from a distance. It is perhaps for this reason some races outfit the drones with small LED lights so that they can be distinguished from a distance.

It seems as though drone racing will not go away any time soon. Some races have already handed out extremely high cash prizes. For instance, the World Drone Prix was held in Dubai recently where the winner took home $250,000. Leagues are also attracting blue-chip sponsors, such as GoPro.

A Rich Yet Short History

Truth be told, drone racing has been around since people could first acquire commercially-accessible drones. It is not hard to imagine two friends both getting drones and then wanting to see which one was faster. If this sounds like something that interests you, then starting is as simple as buying a drone. When just starting out, you do not necessarily have to invest in an expensive piece of equipment. You can simply get the hang of operating a drone around various obstacles until you feel comfortable risking something that costs more.

Types of Drones and What You Can Do With Them 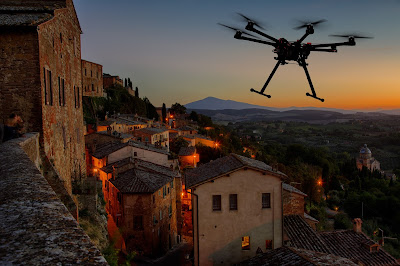 If you’re new to drones, you might be a little confused about what counts as a drone. The broadest definition includes anything that flies without an onboard pilot and is controlled, either directly or indirectly, by a human. This can mean anything from unmanned aerial vehicles, or UAVs, used by the military to spy or deploy weapons, to radio-controlled aircraft flown by hobbyists for fun. That’s a lot of types of drones! Writers on the topic have categorized drones by range, size, capabilities, and method of lift. Method of lift is a good place to start because it has the biggest impact on what a drone can do. And since you’re probably interested in a type of drone you can use for recreational or professional purposes, this article won’t spend time on big military drones. Instead, it will focus on drone types available to the public and all the cool things you can do with them. Know Your Methods of Lift There’s more than one way to get airborne, and different types of drones
Read more